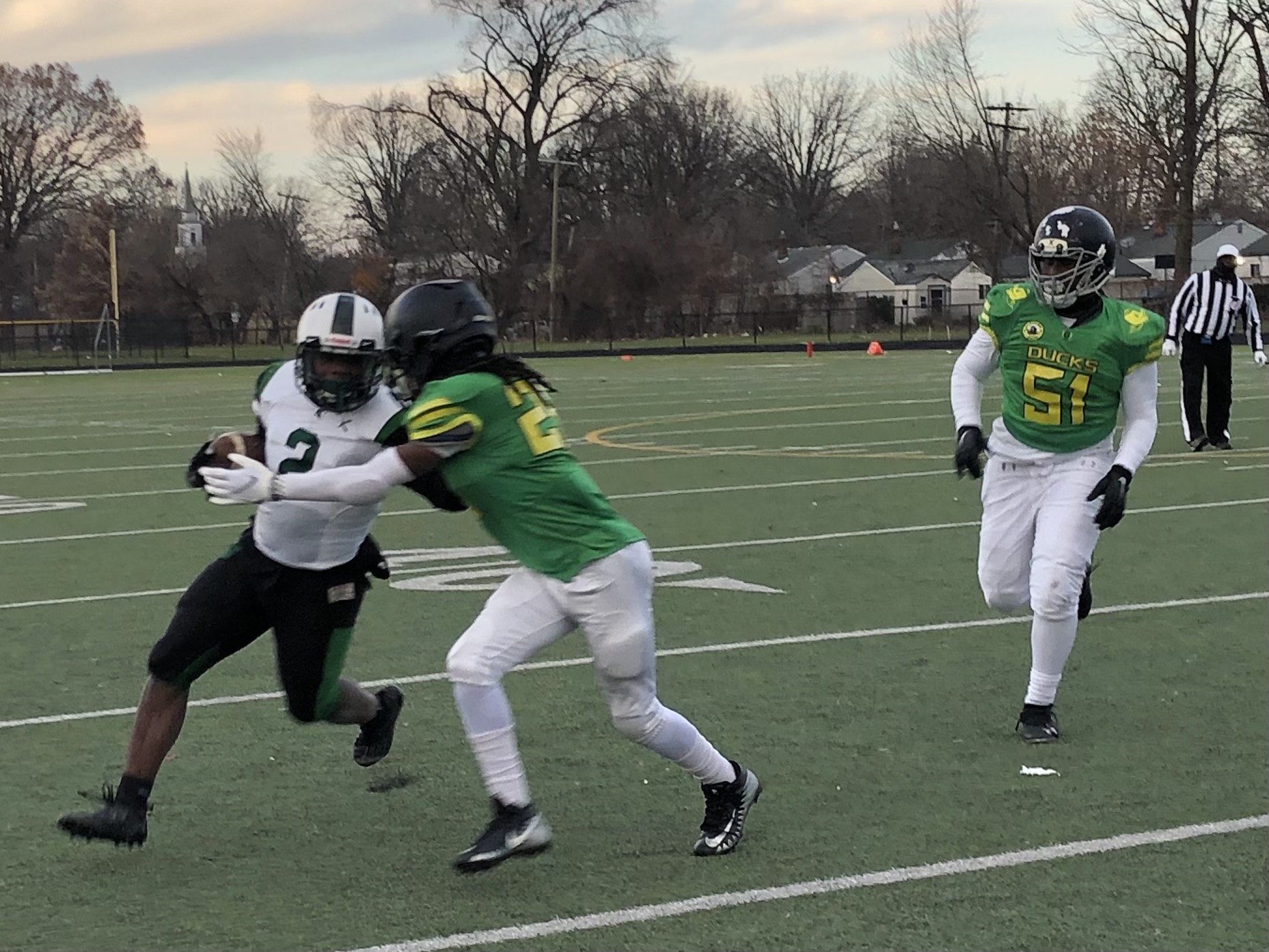 With a spot in the A Team finals on the line, the Oldtown Ducks and Detroit Spartans faced off at 4 p.m., the final game of Saturday’s slate.

In the end, the Spartans emerged victorious, winning 20-6 under the lights of East English Village Prep’s field.

Both teams focused on a run-heavy attack in the first half, attempting to move the ball play-by-play. The Ducks featured many inside runs from the shotgun, while the Spartans relied heavily on multiple-back sets out of the pistol.

Neither team was able to move the ball effectively through the air in the first half, and defensively both teams refused to let any run go the distance. It was a war of attrition in the trenches from the start.

Tim Palmer, running back for the Ducks, was relied on heavily, getting key carries on early downs and picking up a couple first downs.

For the Spartans, Jason Willis Jr. led the team in rushing early on. His 34-yard carry was the longest play of the first half for Detroit.

The Ducks longest play came at the end of the first half, as Kaleb Jefferson hauled in a 34-yard pass to put the Ducks in scoring position. However, with just 40 seconds left, the Spartans were able to keep the Ducks out of the end zone. The first half score sat at 0-0 with both defenses holding strong.

After more of the same in the second half, Jaylin Wilkerson, “Black Panther,” took a run 80 yards to the house. The kick following was good, and the Spartans took the first lead of the game, 8-0.

In response to the Spartans’ quick touchdown, the Ducks put together a long scoring drive which spanned from the third quarter into the fourth. The Ducks methodically moved the ball down the field, culminating in a QB sneak touchdown by Jordan Simes.

The following kick to tie was no good, and the Spartans kept the lead, 8-6.

In need of a stop with 11 minutes remaining, the Ducks’ defense buckled, giving up a 55-yard touchdown pass off a screen from Aspen Keyes to Willis Jr. The kick was blocked, so the Ducks were down one possession with the ball and nine minutes on the clock.

The Spartans defense came to play, however, and the defensive line forced a punt with multiple sacks. The backbreaker came from Rashad Lewis, who sacked the quarterback on third down, making it fourth and 20.

In need of another stop, the Ducks’ defense was powerless in comparison to the Spartan offense. The Spartans moved the ball with ease, led by Wilkerson, who ripped off a 17 and 20-yard run to kill more clock. Colby Reed finished off the drive, putting the Ducks up by two possessions with three minutes remaining, 20-6.

The Ducks offense ran out the clock and couldn’t find the end zone again, giving the Spartans the 20-6 win and the spot in the A Team championship game next weekend.