Dante Moore is primed to have a big year at Detroit Martin Luther King High School.

The junior is going into his third year as a starter, and he is surrounded by talent across the offensive line and skill positions.

On every level he has played, the quarterback has led his team to a title, whether it was with the Detroit Spartans or competing with the Sound Mind Sound Body Max Ex 7v7 team.

Two of his receivers, Joe Williams and Lynn Wyche-el, also participate in SMSB. From the seventh to the 10th-grade he has honed his skills in the program.

“Since we’ve been playing as kids and throwing the ball, we’ve developed that chemistry,’’ said Moore. “I can put it in the air when I need to, and I can trust them to go get it. That was the case even in little league. We have built trust in each other.

“They’ve been my receivers with Max Ex. With 7 on 7s, even though it’s not real football, it’s receivers and DBs, we still try to work on our game. Playing with Sound Mind Sound Body, we’ve traveled to Florida and Tennessee, and it helps. We have fun, we work on our routes, and it helps us get better. It helps me develop timing with my receivers. I work on putting the ball where they can go get it.’’

Even though he was a decorated player before entering the program, Moore has gained more experience from being in SMSB.

“It has helped me get offers,’’ said Moore. “I put in the work and the colleges have seen me and offered. Playing with people like Peny Boone before I was even in high school and other receivers who were older than me has helped slow the game down and make it easier for me to enter high school. Teaching me the recruiting process has helped me a lot as well.’’

There’s no wilting under the glare of attention for Moore. 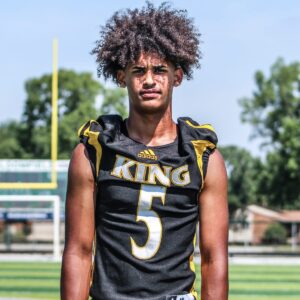 In the eighth grade, he played at the Big House at a Sound Mind Sound Body youth All-Star game.

“It’s such a big place,’’ said Moore. “Even though it was empty it was a great experience. What made it even better was we won the game.’’

He also caught the attention of Jim Harbaugh, who offered soon after.

“Actually, Florida Atlantic was my first offer,’’ said Moore. “We were traveling (SMSB) and we were around their coaching staff. We started talking and they offered.’’

Moore also drew the attention of scouts at the Grand Valley Camp going into his freshman season.

When his competition transferred his freshman season at King, Coach Tyrone Spencer handed the reins to the youngster.

Spencer has opened up the entire playbook for Moore to absorb.

“He is what makes the offense go,’’ said Spencer. “He’s a very smart kid. He’s a leader. He has relationships with every guy on the team on that offense. He’s running track this year. He’s getting bigger and stronger. He’s living up to the hype where people have him as far as rankings. He’s not letting that stop him. He continues to work. He’s going to have a monster year this year.’’