Editor in Chief SMSBWhile concentrating on the Bloomfield Hills football playoff game against Mason, Xavier Bowman, a class of 2024 wide receiver, expected his recruiting list to grow over the winter.

The Sound Mind Sound Body veteran has been in the program for three years. Currently, Central Michigan and Eastern Michigan are the main suitors for his services.

“I hear from both of them a lot,’’ said the 6-foot-1, 185-pound wide receiver. “I think Eastern has been in contact a little bit more, but I like the facilities and the program at Central. I like the family atmosphere. I could see myself at either place. I talk to both the coaches all the time. I have a good relationship with the wide receiver’s coach at Eastern. I like the whole Central Michigan staff. They show good hospitality when I’m up there. I like the interaction up there.’’

Bowman is a big-play threat, having caught 16 passes for 412 yards and four touchdowns. He’s not ranked nationally or in the state, but that will change next year. 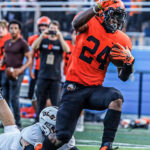 “My season has been going well,’’ said Bowman. “We lost three games during the regular season, but I think we’re peaking at the right time. We lost our quarterback against Catholic Central, but we have the next-man-up mentality. I think we have a chance to go really far.’’

Bowman has benefitted from playing against some of the best competition in the state and across the country as a member of SMSB.

“I’ve always been around kids who have been in the program,’’ said Bowman. “I played youth football with the Southfield Falcons. “All the kids I have been around have gone through Sound Mind Sound Body. I knew about it, and I joined.

“Between youth football and going to Sound Mind I feel like high school isn’t as competitive. Everybody’s high school football team isn’t going to have all the top kids in the state. We travel and go to all the tournaments. It helps me with the season.

“I’ve always been told I have strong hands. My ability to go up and get the ball and create separation are my strengths.’’

Bowman picked Rice because it’s one of the top academic high schools in the state. Academically, the SMSB prep work along with the strict discipline at Rice has been the best of both worlds.

“Academics is the main reason I chose Brother Rice,’’ said Bowman. “It’s the main part of my family and what I want to do in the future. It was between Brother Rice, U-D Jesuit, and Orchard Lake St. Mary’s. I know I wanted to get a good education. Sound Mind has helped as far as studying to get my (SAT) score up.’’

Bowman has his sights on marketing and business once his high school days are over.

“I want to be somewhere I can excel academically and athletically,’’ said Bowman.