The DeWitt quarterback and his teammates made it one to remember.

DeWitt won the Division 3 state title with a 40-30 victory over River Rouge.

“I look back on the season and the one word that comes to mind is dominance,’’ said Holtz. “We had made up our minds back in June that we were going to win a state title. I know we went through COVID and there were doubts about the season, but we had a great group of guys and everything fell into place.’’

Holtz has been part of the Sound Mind Sound Body program since he was 10. In the seventh grade, his mom was diagnosed with cancer.

“I was so young I didn’t know how to handle it and process everything,’’ said Holtz.

Then after being in remission, cancer returned to Ty’s freshman season.

“It was about halfway through the season,’’ he said. “She’s doing well now. She has been cancer-free for about 18 months. She has been done with chemo for a while. Now she’s back to working and doing the things she loves. It’s awesome. It changed me. I said she’s fighting every day and I’m complaining about going to a workout. She taught me to embrace adversity and keep fighting no matter what.’’

Donovan Dooley, his mentor at Quarterback University, also has fought cancer but has rebounded to resume his duties. 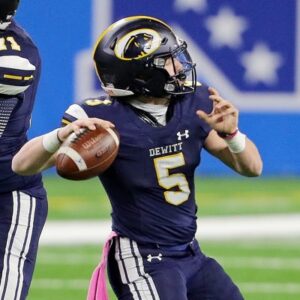 Dooley said he wouldn’t be surprised if Holtz led DeWitt to another state title.

“He’s a fiery football player,’’ said Dooley. “He’s a dual-threat quarterback. Tough. He can make all the throws. Really gritty. Obviously, he’s a state champ. He commits himself to the weight room. He’s very disciplined in the craft. He works his butt off, and I wouldn’t be surprised if they repeated.’’

Tommy McIntosh, his favorite target, is also a part of SMSB. It has helped their chemistry.

“I was 10 or 11 when I went to the first Sound Mind Sound Body camp at Wayne State,’’ said Holtz. “It’s awesome. The thing I’ve carried with me since I was younger was the emphasis Sound Mind Sound Body puts on just being a good young man. They teach you how to respect women, how to be committed, they help you with handling adversity like with my mom.

“This year they extended what they’re all about. Now we get all the tools you need to be successful as a high school athlete pursuing a college career. We’re doing SAT prep, doing recruiting meetings, 7 on 7s. I couldn’t be with a better program to prepare me for the next level. I’m competing and playing with the best athletes in Michigan.’’

And as far as next season, he doesn’t care if teams are gearing up for the defending state champs and making them a target.