The legend of Terence Maize is growing.

Videos of him plowing over defenseless offensive linemen can be seen on Rivals.com and 247 Sports.

He will be the man in the middle of the Detroit Martin Luther King defense.

His time at Sound Mind Sound Body has improved his speed and ability to get to the quarterback. The class of 2022 prospect has one goal in mind this season: To bring another state championship to King.

“Before Sound Mind Sound Body, I just concentrated on getting stronger,’’ said Maize. “I didn’t think about being more limber and being able to bend and improve my footwork. Those are the things colleges want to see.

“They helped me with that a lot and becoming more flexible and things like that. Overall, my workouts have gotten better.’’

King Coach Tyrone Spencer expects Maize to be more than a run-stopper in the middle of his defense. He expects leadership and exemplary play.

“This will be his third year starting,’’ said Spencer. “He’s a really strong kid. He can bench press 225 pounds about 21 times. He’s a strong, physical kid who is athletic for his size. He just anchors the defense up front. He gives our defense that edge and attitude we need to be aggressive and to dominate.’’

Maize is proud of his highlight video. He likes throwing offensive linemen around.

“It was like blowing people up and killing the quarterback,’’ Maize said. “I’m a bigger guy and my footwork and my hips have gotten better. They expect me just to clog the hole, but I want to do more than that. I want to be able to move, have good hips, and be limber.’’

Can I please get the respect I deserve 😕 pic.twitter.com/YGIWkndGyW

He’ll be a key defensive member if King is to make another championship run.

“The main goal is to get a state championship,’’ said Maize. “Get back to the states. It has been a couple of years so it’s time to get back. It’s all about hard work. The defensive line looks to me and I love it. I’ve been a leader my whole life. I felt that way as a freshman and sophomore. I voice my opinion and I want the younger guys to look to me as an example.’’ 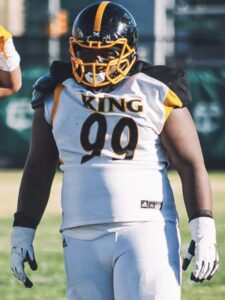 “Dante Moore has developed a lot at quarterback,’’ he said. “He’s vocal and he leads by example. Last year we were a little young. This year, the guys know what we’re supposed to do. We’re ready. Being a King player means a lot. The tradition and legacy that goes on here are more than just the kids that play. It’s the legacy we try to keep going. We can’t act like it’s just us. It’s more than the name on the shirts. It’s King football.’’

“Toledo is talking to me a lot,’’ Maize said. “Bowling Green, Central Michigan…A lot of the MAC (Mid-American Conference) schools. A couple of D-2 schools are hitting me up.’’