Sterling Anderson has been part of Sound Mind Sound Body “all my life,’’ he said recently.

“My dad (Sterling Anderson) and Coach (Curtis) Blackwell are cool and really good friends, so I’ve been a part of the program since I was around seven,’’ said the class of 2023 athlete from Detroit King High School.

“At first I was a little nervous going up against some of the top talents, but competing with MaxEx and traveling across the country doing 7v7 tournaments, made me confident in my ability as a player. Once I realized I could hang with them, it was a confidence boost for me.

“In the offseason, I can go to camps and that helps. Off the field, it has helped my personality. You get to go places with Sound Mind Sound Body. You want to do the right things like being respectful and acting accordingly because you never know who’s watching you. The SAT prep work is always a blessing and has prepared me.’’

Anderson will be like a Swiss Army knife in some respects this season.

Coach Tyrone Spencer is making most of his skilled position players participate in track and field. Anderson is a member of the relay teams and long jumps.

At 5-foot-8, 165-pounds, he will be asked to run the ball for the Crusaders, play the slot receiver, and work on the kickoff and punt return teams.

Anderson hoped a big season, his second on the varsity, would result in college offers.

Spencer said he could see it happening.

“He’s doing really well, he’s running track,’’ said Spencer. “Last year he got a little taste of it with his first year on the varsity. This year his role will increase dramatically. We’ll be using Sterling in the kick return game. We’ll use him as a slot and running back. He’ll be getting a lot of touches whether it’s the air handoffs and special teams. He’s going to be that electric, shifty guy who’ll be able to make plays and change field position.’’

As in every year, Anderson expected to end his 2021 season at Ford Field in the state championship game. 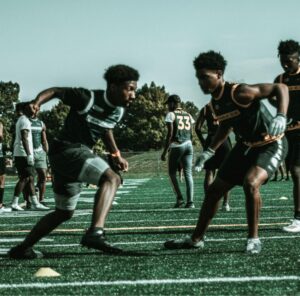 “I think we have the talent to do it,’’ Anderson. “Most of the players are on the track team. It gives us a chance to bond and stays in shape. I expect us to have a big year and be able to compete for a championship. I don’t have any offers right now, but hopefully being a part of Sound Mind Sound Body and working towards a championship, that will change.’’