Joe Williams is ready for a breakout season.

He has been turning heads during his time with Sound Mind Sound Body with his speed, catch radius, and versatility.

Williams and Moore teamed up on the Detroit Spartans in youth football and has carried that chemistry to King.

“I left the Eastside Raiders and played for the Detroit Spartans,’’ said Williams. “Dante is a great quarterback. His vision is really good, and we have a connection. He is our leader. We know we’re going to be there for each other. He knows where to put it and he knows I’m going to go get the ball. Off the field, we have built trust. I have him on my back no matter what and he does the same for me. He makes me look good and I try to make him look good.’’

Williams said SMSB has helped him with his SAT work and also his footwork getting in and out of routes on the field.

“The route-running, speed, and creating space have been things I’ve been able to work on being a part of SMSB. I feel like I’m quicker than last year. My feet and ball skills are better, and I’m jumping higher. I feel like I’m going to score higher on the SATs because of the work I’ve put in. I can get a good look at the SATs when I’m ready to take it.’’

Between the two sports, Williams said football is first. 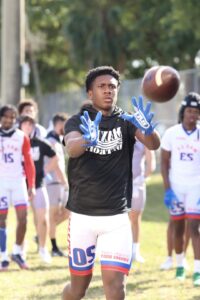 “I’ve never taken a break from football; I have from basketball,’’ said Williams. “I took the break to prepare for football and high school.’’

“Joe Williams is a kid that has a lot of talent,’’ said Spencer. “When the ball comes in his vicinity, he’s going to catch it. He has big hands and a long wingspan, which allows him to be a great target in the red zone.

“We’re excited about Joe this year. I think Joe Williams is the biggest prospect a lot of people don’t know about across the state. He has the talent to go wherever he wants to go.

“It’ll be interesting to see what happens with him. I think he’s going to have a big year.’’

Like Spencer, Williams expects to be at Ford Field for the state championship game.

“Things look good right now,’’ said Williams. “I’m running track and building a bond with the guys. As long as we have that communication and grow as a team. We have a lot of athletes on the team.’’