However, he has kept his ties with Sound Mind Sound Body regarding his son, Jackson, a 2025 quarterback who is also under the tutelage of Donovan Dooley, founder of Quarterback University in Detroit.

Hamilton thinks so much of the program that he flies Jackson to SMSB events in Florida and Tennessee, and shuttles him to Michigan to take part in the program.

“Whenever Curt (Curtis Blackwell) needs him, we find a way to get him back up to Michigan,’’ said Hamilton, who has had stops across the NFL circuit along with Michigan and Stanford. “We really appreciate the servitude of that organization. I think Curt has a great way of holding the kids accountable and being demanding, but not being discouraging. As a father, we’ve gotten to the point in Jackson’s maturity and growth to where he needs to hear some of those life lessons from other male figures than myself.

“Curtis Blackwell has been a tremendous asset in the development of Jackson. A big part of it too is having consistency in the coaches and the direction. It really helps, especially in the quarterback position.’’ 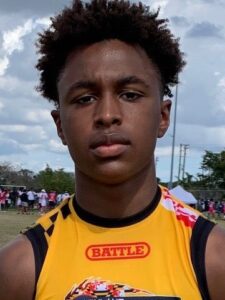 He knows what it takes to be a good quarterback at the high school, collegiate, and pro-level, so putting his son in the right hands means everything to the family.

Dooley expects him to be 6-1 by the time he’s ready to sign his National Letter of Intent for college.

“He’s a talented kid, very cerebral,’’ said Dooley. “Processes things very well. He plays beyond his years. Ultimately, I think he’ll be a really good high school football player and a college quarterback. He’s a dual-threat kid. He has the pedigree, and he has a lot of information due to myself and his dad, obviously.’’

Jackson said he has been back three to four times since the family moved to Houston and meets the Max Ex team on the road when it participates in national tournaments.

While the family lived in Saline, they didn’t seek SMSB until this year.

“Max Ex Detroit is really structured,’’ Jackson said. “They aren’t just yelling at you while you’re out on the field. They are very smart about everything they do. QB is my world. I like how you get to decide what happens to the ball on every play. Making decisions, changing the game; I like to have the game under my control.’’

On one occasion he let Jackson work out with a team in the Houston area. It wasn’t what he wanted, which is why Jackson is still part of SMSB.