When Cole Olsztyn’s family moved from the Orchard Lake St. Mary’s school district into Detroit, the class of 2023 linebacker-defensive back-wide receiver-running back had to pick a new school.

Tradition rich Detroit King ended up being the choice with the same expectations he had as an Eaglet: win a state title.

Olsztyn is finishing his first year at Sound Mind Sound Body and expects the scholarship offers to start coming in soon due to going up against the top competition in the state.

At 6-foot-1 and 195-pounds with a 3.83 grade-point average, Olsztyn has the attributes college coaches are looking for on and off the field.

“All the incentives Sound Mind Sound Body drew me into the program,’’ said Olsztyn. “The virtual college, the tours, and the connections. I was able to gain exposure going into my junior year that I’m hoping will help me. Sound Mind Sound Body under Coach (Curtis) Blackwell are big contributors to that. I have been excited about being in the program. With all the travel for 7 on 7 and getting to play against different athletes from other states, it has helped me when I go to camps in Michigan and even Ohio.

“Before we were similar, now I feel like I have an edge when I’m competing against guys in the state. I’m now receiving recognition.’’

To help with football Olsztyn is on the track team, which is coached by Spencer.

Of the many positions, he plays linebacker is home for him.

“It’s the excitement because you’re the first person doing the hitting,’’ said Olsztyn. “My aggressiveness makes it fun to play the position. They play me at the rover position where I also get to play on the outside, and I can drop back into a safety position. It helps me to cover the slot receiver. It helps me gain speed because the prototypical slot isn’t 6-2 or 6-3. They’re smaller, faster guys around 5-11 or 6-foot who are running a 4.4 (40-yard dash) or a 4.3 in college. 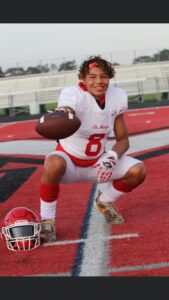 “As a linebacker, it’s helping me become faster and being able to check guys like that and become more versatile.’’

Spencer has added running back to Olsztyn’s list of duties.

“I’ve had a chance to watch him on film and he’s a very versatile player,’’ said Spencer. “He has been at everything we are doing. He’s running track and getting used to our system. He’s a player that we can use at a lot of different positions on offense and defense. We’re excited about him.’’

Similar to Orchard Lake St. Mary’s, he realized nothing short of a state title is a successful season at King.

“That’s another reason I wanted to come here,’’ said Olsztyn. “I know there are great expectations. This is a great program, and they expect to win. I want to be in that kind of environment.’’