The West Bloomfield receiver is coming off a state championship season with the team and is looking forward to continuing the same success in the future.

However, Morgan believed the final four-game they won before the championship was more exciting since it was a close game, and the team felt if they made the championship, they would win it.

“We already knew we were going to beat Davison and it was a blowout, so it was just a great feeling,” said Morgan.

Furthermore, Morgan has received a couple of offers from Ole Miss and Bowling Green State University, which he described the feeling of receiving these offers as unbelievable.

Morgan believed Sound Mind Sound Body has helped him a lot on his journey. He stated how grateful he was for every coach he has worked with and every practice that he has been able to attend.

Additionally, Morgan mentioned how much fun he has had doing the Max Ex 7v7s and how he loves the competition during them. 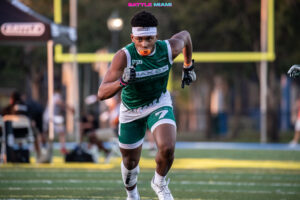 Subsequently, Morgan stated his speed as something he would like to prove to people, and he is a very driven athlete. It will be interesting to see how he continues to grow and prove his speed.