Da’Veon Turner called Army coach Jeff Monken on his birthday with a present. 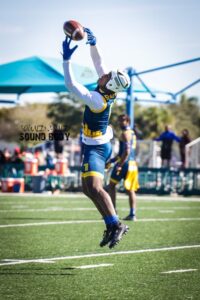 “I told him I was committing to Army,’’ said Turner, a senior defensive back at Harper Woods High School.

“I can’t even begin to tell you how excited he was. They were yelling and screaming. It was great. It’s a good fit for me. It’s the best place on earth. Coach (Matt) Drinkall is their tight ends coach, and he recruits this area. He would call me every day. I was planning a visit there with Sound Mind Sound Body, but COVID-19 came up and it didn’t happen.

“A lot of players were starting to commit, and I started thinking about my future and I thought Army was the best place for me. I talked it over with my family and I knew that’s where I wanted to be.’’

Turner is 5-feet-11, 175 pounds, and said he could play anywhere on the field for Harper Woods or Army.

Davion Weatherspoon, Turner’s teammate with the Detroit Titans and Harper Woods, had the same vibe about Ohio University, where he committed.

Ray Lyons, his coach with the Titans, wouldn’t be surprised if Weatherspoon was wooed away to greener pastures. 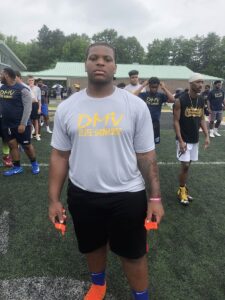 “Last year he broke his ankle, started eating and ballooned up to 340 pounds,’’ said Lyons. “We call him Baby D. Schools like Michigan and Bowling Green were recruiting him before he got injured. He worked off the weight and he’s down to 280 pounds, and he’s about 6-1. I think he’ll be getting phone calls.

It might be tough to pull Weatherspoon away from Ohio.

“They called me every day,’’ said Weatherspoon. “They even called my aunt (Elizabeth Hunt), who I live with. They talked about more than football. They were concerned about me and my family. We talked about life. I like the way they play. They run the ball and I love run blocking. I’m excited about going there.’’

Both Turner and Weatherspoon have participated in SMSB since the sixth grade along with former Titans teammate Will Johnson (Grosse Pointe South) and have reaped the benefits on and off the field.

“It’s the best program in the country,’’ said Turner. “I want to get into the medical field. I thought about Kinesiology. They have so many different medical fields at Army, I’ll wait until I get there. The SAT prep work was great, and it got me ready for things off the field that I might not have been ready for.’’

Said Lyons: “Both had offers in the ninth grade. Da’Veon is a quiet kid, but he’ll do whatever you ask him. He did the virtual tour of Army and I talked him into looking at Army because some kids don’t believe that’s real football.’’

While Turner is looking at the medical field, Weatherspoon is interested in computer technology or engineering.

Their senior season hasn’t been so great. Harper Woods is 1-3.

“We’ve had one of the toughest schedules in the state,’’ said Weatherspoon. “We’ve played Davison, Detroit Catholic Central and Notre Dame Prep.’’

For Turner, it’s a blessing just to play.

“When the season was in doubt I was concerned,’’ he said. “The thing that helped me was I knew I was going to Army next year, so with my future in place I didn’t have a lot of anxiety about playing like I would have if I didn’t know where I was going.’’