It’s rare that a Cass Tech High School athlete flies under the radar, but that’s the case with junior wide receiver Jameel Gardner.

The 6-foot, 170-pounder didn’t start playing football at CT until his sophomore year.

“Coach (Thomas) Wilcher saw me at school, working out, and he told me he wanted to contact my father about playing football,’’ said the Sound Mind Sound Body Class of 2022 participant. 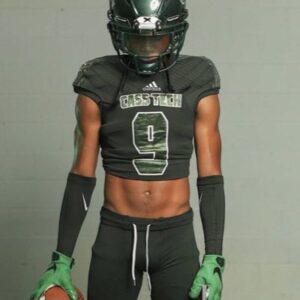 “I didn’t play football as a freshman and I didn’t get on the field my sophomore year until the playoffs. I do believe that I’m under the radar because people didn’t really know about me.’’

He’s starting to make a name for himself. Participating in Sound Mind Sound Body has helped.

“I’m going to a lot of camps and trying to get better every day,’’ said Gardner. “Sound Mind Sound Body helps me compete on a different level because these are the best kids in the state. The experience and travel; competing against different competition across the country and becoming a leader and being more vocal has helped me as a player and a person.

“I know my teammates at Cass Tech are watching me through Sound Mind Sound Body. I’m getting more attention on Social Media wise, but I feel like I’m still under the radar a little bit. I started late in the game.’’

He literally burst onto the scene as a junior.

Despite missing three games because of COVID-19, Gardner hauled in 10 touchdowns and had 600 yards receiving.

“I really didn’t realize I had that many touchdowns,’’ said Gardner. “We missed three games. I probably would have been about 15 touchdown catches and 800 yards receiving.’’

With the attention has come offers.

Gardner is up to six.

“I have heard from Akron and Toledo,’’ said Gardner. “There have been some Power 5 schools that have contacted me like Michigan State and Florida State.’’

When Gardner was asked about his size being similar to Heisman Trophy winner DeVonta Smith, he didn’t hesitate.

“People talk about his size but he’s a football player,’’ said Gardner. “His numbers last year were incredible. It’s not the size that matters it’s the toughness. I believe if he can do it, I can do it.”