Jacob Oden has been around football his entire life.

When he goes home not only does he have to deal with his father, Rod Oden, but also his Harper Woods football coach, who is also Rod Oden.

“No, I never let up on him,’’ Rod said about his 2024 safety, who’s already taller than him. “I’m on him all the time. Safety is his best position. He’s versatile. His skill set allows him to play five or six different positions. Everything in the secondary and probably some outside linebacker stuff too. He has the ability to play in space and tackles well enough to play in the box if necessary. He checks all the boxes in terms of what college coaches are looking for. Guys that can do more than one thing.’’

A Sound Mind Sound Body participant since he was 9, Jacob already has racked up significant offers from Power 5 schools.

He credited SMSB for helping his confidence and athleticism.

“Sound Mind Sound Body has helped me on and off the field,’’ said Oden. “We train every Sunday. We have SAT Prep. That’s all we talk about in the classroom is the SATs. In order to play college football, you need to be solid in the classroom. I don’t know what I’d like to study in college but right now I’m working on graphic design.’’

His training at SMSB includes speed training on Saturdays and going to compete at 7v7 tournaments. 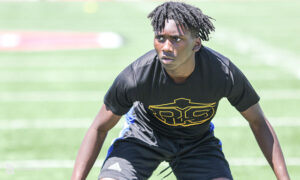 He has adjusted playing for his father, but he also realized more is expected from him by his teammates.

“Last year it wasn’t bad because mainly I was on the defensive side,’’ said Oden. “But this year is different because I’m playing wide receiver on offense. He never stops getting on me.

“There’s more pressure because people know me. They know I’m his son.’’

His summer will be busy traveling with his 7v7 team and participating in the Rivals All-Star Challenge later in the summer.

The better he performs the more he realizes more offers are on the way.