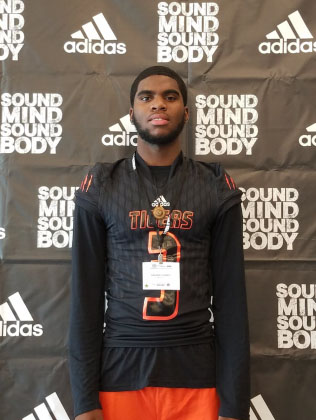 Carey is a Class of 2018 3-star cornerback, according to 247Sports. He is the No. 41 prospect in Michigan for his class. He was a part of the Sound Mind Sound Body Football program for two years, and officially signed with Western Michigan in 2017 during the new early signing period.

What did participating in Sound Mind Sound Body mean to you?
Carey: “It meant a lot. It helped me explore new opportunities. I was never a high school football player. So, when I went to Sound Mind Sound Body, that was really the first high school football camp I ever went to (occurred in his junior year). I really enjoyed the experience. I liked all the guest speakers that talked about their lives and their experiences as well as what you’ve got to do to become a man. And all of the college coaches really showed me, too, that this was a great and unique opportunity. It got me to love football. So, I soaked up all that I could, continued playing football in high school, and it got me to where I am now.”

He added, “Having college coaches, such as Urban Meyer, come over to me and tell me that I’m rare and that I’m a tall, long corner, it showed me that I belong and really have a chance to play Division 1 football.”

Why did you sign with Western Michigan?
Carey: “It fits me very well, and I really love the atmosphere. And the coaches are very welcoming, like you’re their own. They’re very calm and relaxed around you, like they don’t have to do too much. And they’re just themselves around me, and I like that. They don’t have to try extra hard to impress me or anything like that.”

What’s the biggest lesson that SMSB taught you?
Carey: “Don’t make dumb choices or dumb decisions. I wasn’t always the best student. Sometimes, I bumped heads with my teachers. But going to Sound Mind Sound Body showed me that I can’t do that (make bad choices) in life. I want to be able to graduate, go to college, do something in life and have everybody like me when I come back to Belleville. I want to be welcomed back. So, I just really had to change my life around, and develop a good relationship with my teachers and the community overall to make sure that when I do come back, everyone welcomes me.”

If you had the opportunity to come back to SMSB to speak to the students that are currently in the program, what would you say to them?
Carey: “I think I would just tell them to enjoy the process. I think there are a lot of kids that come (to SMSB) just to come because it’s a camp. And sometimes, some kids don’t take it seriously. But for some kids at the camp, it’s their life, so they’re going to take it seriously. If you don’t take it seriously, you will get exposed. And if you say the wrong thing around the wrong person, everybody’s always watching. So, if you slip up and say the wrong thing, that could really hurt your chances of becoming the good football player that you wanted to be.”

He added, “You don’t want to be on Twitter liking or saying certain things because that’s a bad image for you, your family and school. College coaches just won’t like that. So, make sure you’re always aware of your surroundings and of what to do plus what not to do.”