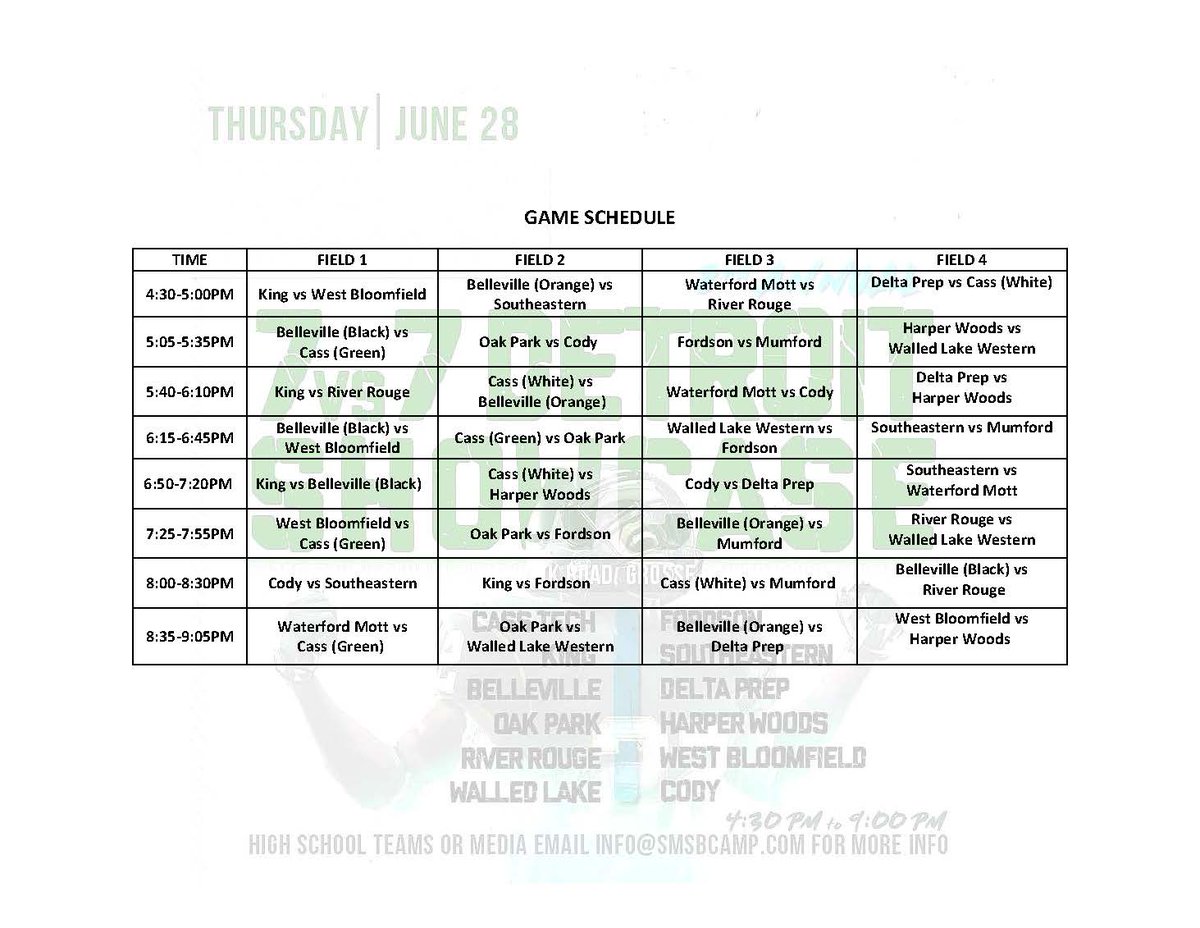 As high school practices have yet to start, SMSB is providing a platform for athletes and teams to compete at game speed. This event includes premier talent and elite teams.

Cass Tech and King are established powerhouses that recycle Division I talent year in and year out. West Bloomfield is a program on the rise that has several top recruits nationally, and Oak Park, Belleville and River Rouge are teams made up of multiple future Power 5 conference athletes.

As much “wow factor” as this showcase has, it also includes many up-and-coming players and schools looking to get quality reps and exposure.

“This 7-on-7 has great competition, and is a measuring stick to show how to get better,” Southeastern coach Courtney Dinkins said. “Some of our kids get overlooked because of all the talent in Detroit, but this is a great opportunity for them to see how good they are.”

Southeastern had two wins in three years before Dinkins took over in 2017. He immediately improved the program, and posted a 4-4 record.

Dinkins knows the Southeastern name does not carry the weight that Cass Tech and King carry, which is why he’s focused on rebuilding the Southeastern program through developing the talent he already possesses.

“Showcases like this were not around when I played,” Dinkins said. “This 7-on-7 has a great impact on our players.”

Southeastern is looking to have big performances from 2019 WR/DB Kareem Powell and 2019 safety Damari Covington-Woods.

Dearborn Fordson is another school that may get overlooked, but not for good reason. Fordson led by Fouad Zaban has racked up 33 wins over the last four seasons.

The Tractors have been consistently productive throughout the years, and are looking to break out and have big performances today.

“This is something our kids definitely look forward to,” Zaban said. “Developing confidence is the most important thing, and our kids can play against great competition and realize they can play with anyone.”

This showcase will help the Tractors, as a team, by preparing them and giving them confidence for the upcoming season. According to Zaban, it will also help the Tractors’ players develop because learning from great competition helps develop a player’s skillset.

Fordson will count on its returning starter under center in 2019 QB Hussein Ajami to make an impact both today and on the 2018 season. RB/DB Abe Jaafar, WR Ahmed Allamy and OLB Tim Stallworth, all 2019 prospects, could also make significant contributions to Fordson’s 7-on-7 team.

Waterford Mott is another team that has not gotten much attention, as of late. The Corsairs are led by their talented secondary, which consists of 2019 DB Keith Fields, 2021 WR/DB Quillen Howze, 2019 WR/DB KaMariell Manley and 2019 WR/DB Nikobe Myers.

“I want to thank Coach Blackwell for putting this on and letting the kids compete but (also) have fun,” Waterford Mott coach Chris Fahr said.

Fahr said the SMSB 7vs7 Showcase will serve as a reminder to his players of how hard they need to work and show them where they stack up.

At quarterback, the Corsairs are led by 2019 prospect Matt Castillo, who has taken snaps at other positions as well, like wide receiver and safety. According to Fahr, Castillo has great talent, and this showcase will give him reps against quality competition in preparation for his first year under center at the varsity level.

“This showcase is a great atmosphere, as it is important to go up against the best players in the state,” Fahr said.

Detroit Cody participated in the first annual Detroit Showcase last summer, and lost on the last play of the semifinals to powerhouse West Bloomfield.

“This year, we have a lot of young players who have not played varsity football,” Cody coach Calvin Norman said. “It will be great for them to get experience playing at such a high level.”

At today’s SMSB 7vs7 Showcase, Cody will feature 2020 receiver/free safety Joshua Willey, who has gotten Div. I looks and will be a player to watch out for on both sides of the ball, according to Norman.

For Cody, you should also be on the lookout for QB Tragene Williams, who is a talented athlete that can play any position, according to Norman.

Detroit Delta Prep is coming off an impressive 2017 season in which it finished 6-4. It will look to duplicate and build on its success this upcoming season.

“It is early, and we are getting a feel for each other,” Delta Prep coach Deon Godfrey said. “Going against great talent will only make us better, and that is our goal, to get better every day.”

Delta Prep and the event’s 15 other teams, including two squads from each Belleville and Cass Tech, will be ready to play, and looking to improve their skills heading into the 2018 campaign at the second annual SMSB 7-vs-7 Detroit Showcase.

The Showcase is bound to produce the best prep football action in the Midwest you’re going to see all summer long.

All the action, including 64 must-see matchups, kicks off at 4:30 p.m. at Grosse Pointe Woods University Liggett. You can watch it all as a spectator by paying $5 when you arrive to the field.

Note: It is recommended that everyone expecting to spectate brings lawn chairs because of limited seating at the field.