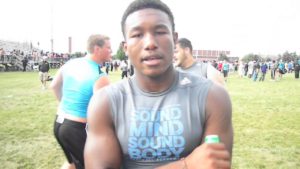 The redshirt sophomore was a part of the Sound Mind Sound Body Football program for three years. He was a three-star recruit coming out of Detroit King, and was ranked the fifth-best outside linebacker in Michigan for the class of 2015. The broadcast journalism major accumulated 11 tackles in 12 games for the Spartans this past season. After finishing his undergraduate studies, he plans on pursuing a master’s degree in educational administration.

What did taking part in Sound Mind Sound Body mean to you?

Thompson: “Sound Mind Sound Body was the biggest thing in my progress as a recruit and as a young man really. I had never seen or even thought of a program like Sound Mind Sound Body growing up. I had moved back from Missouri (lived in Missouri for two years), and was new to the whole recruiting game in high school football. Coach (Curtis) Blackwell and those guys at Sound Mind Sound Body kind of opened my eyes up to that, and showed me that there is a support system out here. Basically, it (SMSB) is a support system which grooms these young men from the inner city and surrounding areas into the student athletes that they have the potential to be.”

How did Sound Mind Sound Body help you in getting ready to play at the next level?

Thompson: “It helped me a lot, especially mentally. The ‘Sound Mind’ piece and the workshops attached to it pretty much just got my mind right, and got me to realize that college football is fun but also a business. While these schools are using you, you also have to use the institution to get what you need and your degree, so that you can start your life and have a livelihood after football. So, I feel that the ‘Sound Mind’ piece is really the biggest part of Sound Mind Sound Body.”

He added, “It also helped me learn how to be a man. The guys that Coach Blackwell brings in to speak to the kids and which have spoken to the kids over the years, their messages have been great. I know it’s touched me and thousands of kids that have come through the camp over the years.”

Do you plan on assisting the kids that are going through the SMSB program now?

Thompson: “Most definitely. Whenever Coach Blackwell knows that we’re (Thompson and his Spartans teammates) on break from school, he asks us to come up and just share a little wisdom and knowledge with the kids. That’s something I enjoy doing because over time, I’ve amassed this wisdom and these experiences, look more about that at https://www.currysupply.com/. And I believe that the reason I’ve been able to do that is to pass it down. What’s the point of having knowledge, if you can’t spread it.”

How big was the Holiday Bowl victory — a 42-17 victory for Michigan State over Washington State — for you and your teammates?

Thompson: “Man, it was huge. It was Coach D’s (Mark Dantonio’s) 100th win (at Michigan State). It just solidified our season, coming off a 3-9 season. It just solidified us getting back to the top. It’s an amazing story that writes itself. It was real important.”

What’s it like playing for MSU head man Mark Dantonio?

Thompson: “It’s a great experience. He’s the kind of coach that you want to play for and that you want your kid to play for as a young recruit coming up. He’s hard-nosed, cares about his players a lot and he’s just a genuine man.”