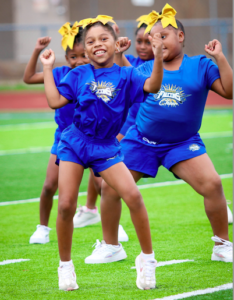 Set, ready, set! Sound Mind Sound Body (SMSB) is conducting its first Detroit City Cheer Championship this Sunday. Eleven of Detroit’s most elite cheer teams will compete in the local qualifier to advance to regionals in November. Partnered with the school district of Belleville, the competition will take place at Belleville High School.

Motor City Wolverines, Oldtown Ducks, River Rouge Panthers, Southfield Falcons, West 7 Rams, Westside Cubs, and the Westside Steelers will all make history as being the first teams to be a part of a local competition where team stunting is allowed. For SMSB, the mission to close the gap between under-served youth and gender disparities amongst female student-athletes comes with being mindful of exposure. Stunting reveals a different world of cheering to the inner-city kids and introduces them to the next level. It prepares cheerleaders to use their stunt skills and experiences for high school and positions them for scholarships. Sub-Committee Chair of Cheer for SMSB, Lisa Sampson stated, “Normally, the girls do dance and cheer, but by stunting, they will be up to par when accepted into college. When we had the HBCU weekend, they brought their coaches in, showed us different stunts, and gave us a new look to cheer. We won’t have to go out of the city to expose our children to stunting because it will be something that will be recognized as being a part of inner-city cheer.”

Each team has been working hard to create dance and cheer routines to perform in front of a national judge panel of four esteemed members from New Hampshire, New Jersey, Pennsylvania, and Washington DC. Based on criteria given before the competition, teams were to govern their performances according to strict guidelines. Midwest Regional Director of Cheer, Teresa Parham shared, “Not only are national judges a requirement of the league, but it helps in avoiding mistakes and removes any biases and affiliations to create fairness across the board.”

The Detroit City Cheer Championship will have over 900 cheerleaders in attendance, making it the largest local cheer competition under AYC. With an exceptional guest team Midwest Elite performance, Sunday’s contesters will have so much hard work to leave on the floor of such a historical event. Doors open at 8 am, and the competition begins at 9 am. Tickets for all spectators are just $10.