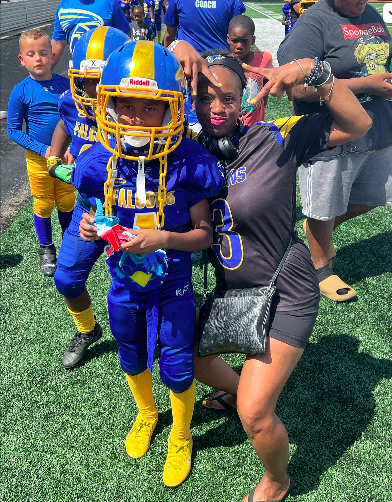 Shawn Lloyd has been a passionate and faithful volunteer to the Southfield Lathrup Falcons organization for the last eight years. Her commitment to serving was ignited through her sons, who have made their mark as football players. As the organization’s administrator, Shawn creates correspondence to address and improve the requirements and desires of coaches, parents, and players.

Shawn Smith, President of the Southfield Falcons, shared the many

hats worn by Shawn Lloyd, “She is the organization’s administrator, a team mom, the registrar, the event planner, and player transportation coordinator. She brings player meals and snacks and does the equipment inventory.” Shawn spends two to three hours a day during the week, both Saturday and Sunday helping to aid the organization’s flow. She considers herself an additional coach and loves to counsel student-athletes. Shawn sees volunteering as a second job that she is fully invested in and loves dearly.

“I love seeing the kids growing up within the organization. It’s inspiring that we have younger men and women who want to see both the inner-city and suburban kids come in and want more.” Shawn loves being a part of an origination where she can watch the kids grow up. Having had the privilege to watch her older son age out of the organization, Shawn is familiar with the bonds formed over the years. Being a part of an organized sport has allowed Shawn to experience firsthand the recognition and support of her children within the entire league.

When asked what keeps her driven to volunteer year after year, Shawn replied, “The drive is not just my kids, but my love for my organization. I enjoy them, and I see what they are trying to do. The Raiders are driven. It’s easy when you’re a part of any team that appreciates you and what you do. I get to appreciate what they bring and offer when mentoring the children. Mentoring is something you see in the coaches. And when you see how long this organization has been around, you’re drawn to it.”