Amid circumstances brought about by the COVID-19 global pandemic, schools across the state of Michigan were forced to close their doors on March 16. Educational instruction took on the form of online coursework and lessons. However, in cities like Detroit, where the poverty rate is nearly three times higher than the national poverty rate, access to resources that are conducive to ensuring a successful learning environment is limited for many students. 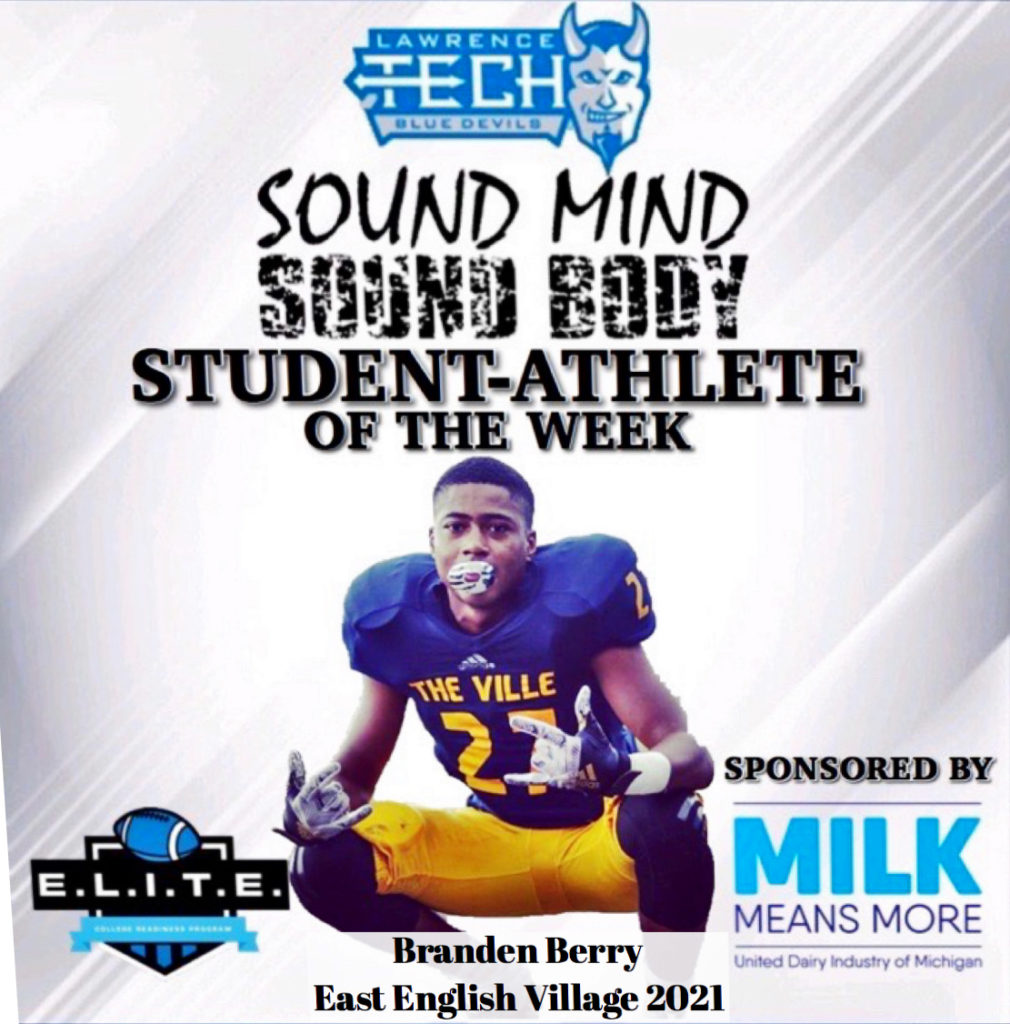 There are students, like East English Village Preparatory Academy senior, Brandon Berry, who have found a way to make the most of the resources they are given. Berry is a part of the “SMSB E.L.I.T.E.” program, made possible by the Sound Mind Sound Body Foundation in partnership with Beyond Basics, Detroit Public Schools Community District, and Detroit Lions rookie Jashon Cornell.

Berry has now been a part of the SMSB Football Academy for one year, and has committed to making a shift in the way that he carries himself.

“One thing I’ve learned is that you never know who’s watching and paying attention to you,” Berry said. He believes that the mentorship and tutoring that he has received through the SMSB E.L.I.T.E. program has been a large part of his maturation as a young man.

“My friends tell me that they look up to me, and that pushes me to want to be better in life. I was at a point where I thought reading was lame, but the program has given me an opportunity to educate my friends and put them on to books and knowledge that they might not have ever been introduced to,” Berry said.

The program offers 50 hours of one-on-one tutoring, mentoring, and training with a focus on literacy for DPSCD student-athletes. SMSB founder Curtis Blackwell II says that the program has allowed him to reconnect with his “Why?”

“The ELITE program is pivotal because it is a departure from the narrative of what people are saying about Detroit and the people that look like me who are from here,” Blackwell said.

“Those that are from the city, that have come from the same situations that these kids come from, have more influence than anybody else in making an impact on them. People on the outside looking in don’t know the things that we have to overcome just to live a life that is considered ‘normal’.”

With 12 brothers and 11 sisters, Berry grew up in a house with seven of his siblings, five nephews, and three nieces. On his 8th birthday, he met his father for the first time, just for his father to tell him that he did not want anything to do with him, and that he would never amount to anything in life. By the age of 10, he witnessed his best friend accidentally kill himself while playing with his dad’s gun.

“Certain things don’t have an affect on me anymore,” Berry said. “I started getting into trouble, doing stupid things. I had a problem with authority figures, and any time a man would try to help, I didn’t know how to react.”

Berry first met Blackwell a few years ago through Horatio Williams, and had an opportunity to be a part of the Sound Mind Sound Body Football Academy camp shortly after.

“I felt like I was cared about, like I was really wanted,” Berry said of his experience with SMSB. “I’m passionate about anything that helps me grow as a person, and as I matured I began to see that. I’m grateful for positive male figures in my life like Coach Blackwell, someone who actually cares about the kids he works with.”

The SMSB E.L.I.T.E. program is sowing seeds into the youth of Detroit, cultivating the growth of talented young minds to continue uplifting communities that too few outside of the city seem to care about. Leaders like Blackwell and the SMSB network of coaches and mentors are examples of what it means to take initiative in the nurturing of future generations.

Since 2004, the Sound Mind Sound Body Football Academy has been a provider of mentorship, stability, and genuine care for more than 10,000 student-athletes in cities around the United States and abroad. Over 2,000 SMSB alum have earned college scholarships through football, and many more have gone on to become positive influences within their families and communities.