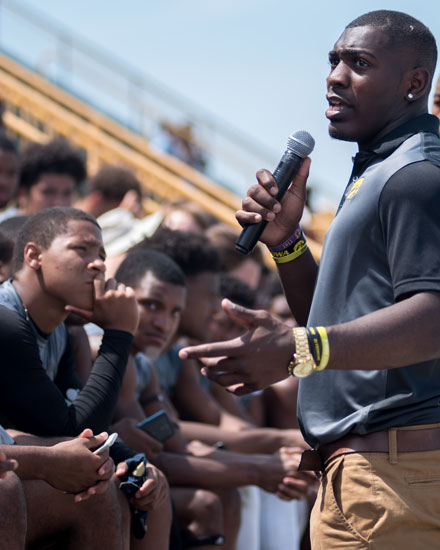 SMSB has a plethora of former participants displaying their skillsets at various levels of competition (i.e. in high school, in college at the NAIA and Division I levels plus in the NFL). So, let’s take a trip down memory lane, and highlight the career of one of those former participants: former Detroit East English Village and Iowa Hawkeyes star Desmond King.

As a prep star, he played running back and defensive back at Detroit Crockett High School, before it closed down and merged with Detroit Finney High School to form East English Village.

As a defensive back, he set a state record with 29 interceptions. He also set a school record for career rushing yards with 2,360 yards. Additionally, he had one of the best games in recent memory against Detroit King. He ran for 220 yards, and had a game-clinching interception return for touchdown from 75 yards out. It delivered East English its first win in program history.

King then took his talents to the University of Iowa, where he made an immediate impact starting as a true freshman.

As a Hawkeye, King demonstrated why he was one of the best defensive backs in the country, being awarded the Jim Thorpe Award in 2015.

In 2015, he was also named a consensus All-American, an All-Big Ten selection and the Big Ten Defensive Back of the Year, while winning the Jack Tatum Award.

As a senior, he continued to pile up the accolades, being named an All-American and All-Big Ten performer for a second consecutive season.

While his on-field feats were amazing, his most admirable accomplishment in college was graduating with a degree in African-American studies in less than four years.

To no surprise, King was drafted in the fifth round of the NFL Draft by the Los Angeles Chargers.

As a rookie, King tallied 76 tackles, four sacks and one interception, which resulted in a touchdown.