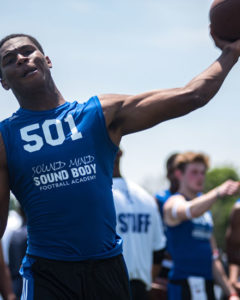 The freshman was a part of the Sound Mind Sound Body Football program for five years, starting when he was a seventh grader. He was a three-star recruit coming out of Detroit Cass Tech, and is pursuing a degree in kinesiology at Northern Illinois.

What kind of impact did Sound Mind Sound Body have on you?
Hall: “It had a huge impact on me and my peers growing up. A lot of people grow up without father figures. Those without father figures don’t get told about the necessary tools that they need in order to grow and become men. Sound Mind Sound Body brings a lot of speakers in that can be role models to kids that are lacking that presence at home.”

He added, “For me, it taught the importance of being better each day (off the field). That’s a really good tool. And while at the camp, you get the chance to ask questions and pick the brains of the college coaches. It’s also a really good thing for the city and for athletes all over because you get to see who you’re competing against and who could be some of your future (college) teammates. And you get to grind and compete, and see where you lay at on a national level.”

Who are some notable guys you competed against while participating in Sound Mind Sound Body?
Hall: “During those days, I remember a lot of 4-and-5-star DBs (defensive backs) and a lot of 4-and-5-star receivers from the state of Michigan, like (Penn State freshman) KJ Hamler and (Hall’s former Cass Tech teammate and Michigan freshman) Donovan Peoples-Jones.”

What would be your message to the guys that are going through Sound Mind Sound Body today?
Hall: “Talk to all the college coaches you see, and pick their brains. If you don’t talk to them, remember that closed mouths don’t get fed. You want to make sure you at least talk to them and that you get a chance to prove your worth. You don’t want to waste an opportunity.”

How did the experience of going through SMSB get you ready for playing at the next level?
Hall: “The level of competition at Sound Mind Sound Body is huge. It’s like gameday, really. People are out there clapping and yelling, and you see receivers ready to get the ball. It’s a very hype atmosphere, and that’s how it is in college.”