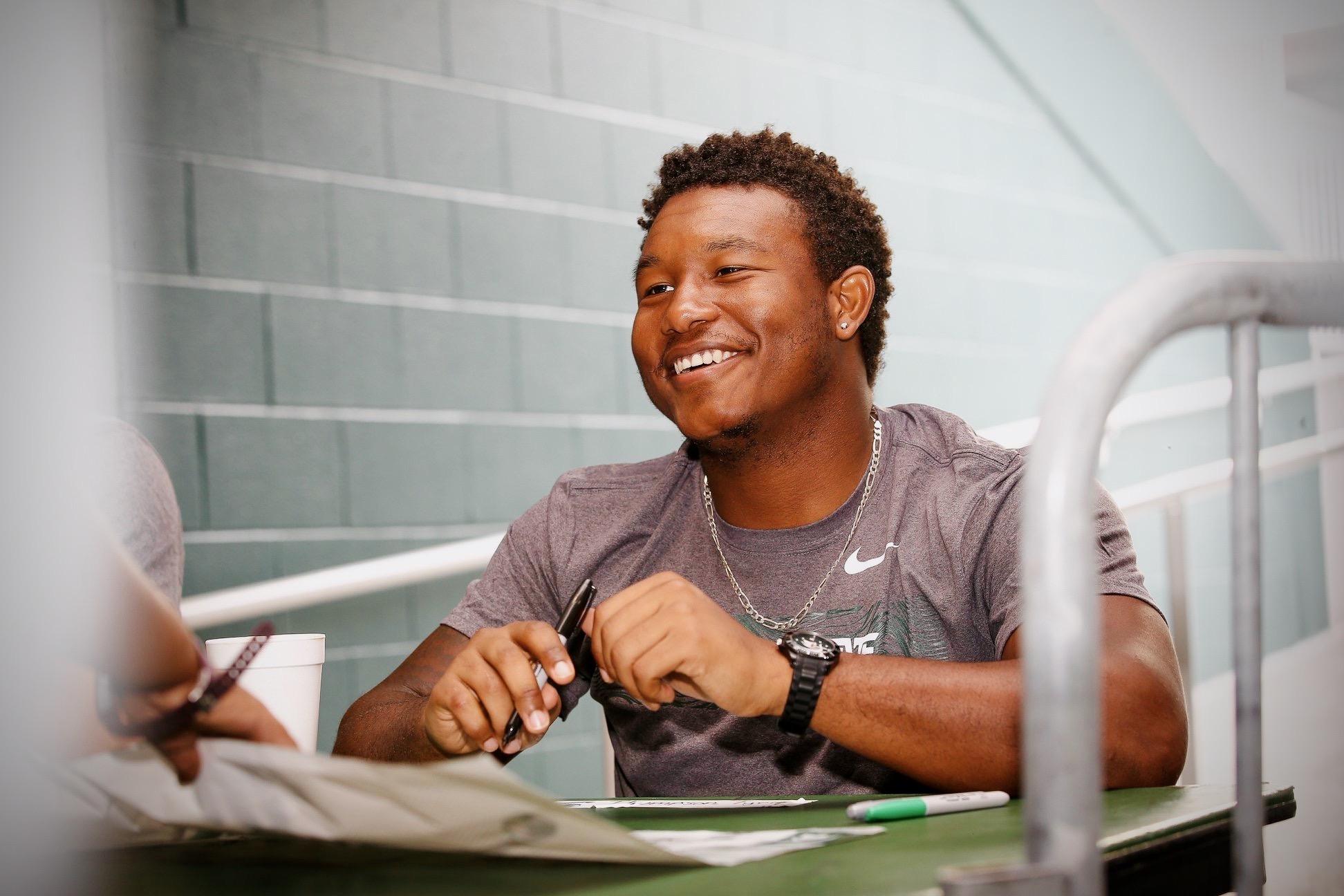 In 2012, I attended my first Sound Mind Sound Body (SMSB) Football Academy camp held at Southfield High School. It was my first time ever participating in a camp of that magnitude. I hadn’t even decided which high school I would attend in the fall, yet SMSB had me thinking about college.

The same college football coaches that I would watch on TV coaching their teams every Saturday afternoon, were going to be watching me run through drills showcasing my potential. That weekend was the first time in my life that I felt like my dream of playing football on TV was 100% attainable.

SMSB not only showed me how close I could be to living my dream – it educated me on what it would take to make it a reality. For some of the other young men around my age that attended the camp, that weekend was the first time they were told that athletic ability alone would not be able to carry us as far as we hoped to go in life.

That weekend was packed, full of classroom “chalk talk” sessions with teachers, motivational speakers, and men mentors who all believed in us and our potential. Over the years, that camp and other camps like it put on by SMSB was filled with hundreds of young men who hoped to become the best versions of themselves on and off the field.

Eight years later, after a successful football run at Detroit’s King High School and Michigan State University, I was blessed with the opportunity to come back to SMSB and observe what the organization was doing for Detroit Public Schools Community District student-athletes.

This summer SMSB started a new program, “SMSB E.L.I.T.E.”  The E.L.I.T.E. program was unlike anything I had seen before. While staying true to the core principles of SMSB, the program took their initiatives a couple steps forward.

The acronym “E.L.I.T.E.” stands for “Engaged Leaders Inspired to Train Efficiently.” These young men participated in a virtual literacy tutoring and mentoring program for five days a week in the midst of a global pandemic.

They had three goals: 1. Build relationships 2. Go “5for5” with their tutoring sessions and 3. Improve their literacy. I had the pleasure of speaking with some of the young men in the program, and had conversations with them about who they were as young men, the goals they set for themselves, and the impact that Sound Mind Sound Body has had on their lives.

To hear their individual stories, and to see the enthusiasm they showed being a part of the program was the highlight of each week for me. I listened to these young men explain how SMSB changed their lives and gave them new direction. It was something that they were excited to talk about! The amount of gratitude that they expressed for Coach Blackwell, and the men and women who dedicated their time to helping them on their journey, was beautiful.

The student-athletes who completed the program received up to $1200, new gear and cleats, a bank account with Comerica Bank, and other useful resources. But the one thing that stuck out to me, in particular, was that every young man I spoke with said that the things they were receiving was not the reason they stuck with the program.

The relationships these student-athletes were building, and the life lessons they were learning, were what they valued most — someone was taking the time to nurture and pour into them knowledge and guidance that they would not have received otherwise.

On Sunday afternoons, I sat in on classroom sessions and watched the workouts that they participated in. The way that Coach Blackwell talked to the young men was exactly the same way he talked to my peers and I, and challenged us to think critically and step outside of the box of “athlete.”

The way that the program was run, and the level of accountability that these young men were held to, reminded me of what was expected of me as a collegiate student-athlete. If a tutoring session was missed, everyone in the program knew about it. The structure of the SMSB E.L.I.T.E. program was designed to equip its participants with the tools needed to reach the next level and prepare them for what would be required of them when they get there.

I am inspired by the dedication that the student-athletes in the program showed. They were able to see growth and positive changes in themselves in such a short period of time, which serves as motivation for every one of them to continue to strive for greatness.

Coach Blackwell and SMSB found a way to dig deeper than the surface level, and plant seeds in the minds of the future of our community. Sound Mind Sound Body is a staple in Detroit youth development, and more programs like it are greatly needed for the prosperity of our young people.

I will always be an advocate and spread the word about the program, with hopes that it will inspire someone else the same way that I was and continue to be.