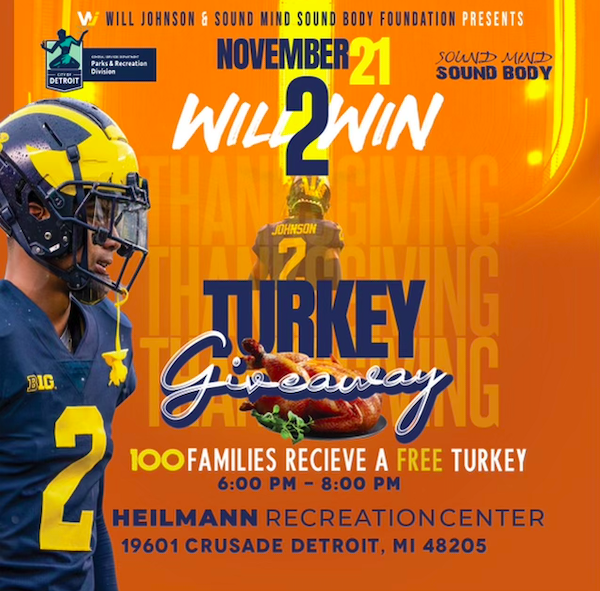 Thanksgiving is less than a week away, and Michigan Wolverines defensive back, five-star recruit, and the No. 1 recruit in the state of Michigan for the 2022 recruiting class, Will Johnson, is using his name, image, and likeness (NIL) capital to give back in an impactful way. 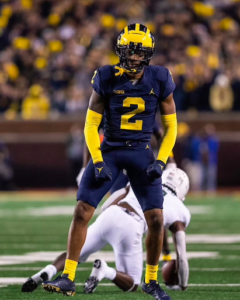 Will Johnson dominating in Michigan’s game.

While starting as a true freshmen at one of the top three universities in the country, Will has made the time to host an event called “Will 2 Win” on Monday, November 21st, at the Heilmann Recreation Center. Will plans to ensure 100 families receive a free turkey within one of the most underserved neighborhoods in the nation. From 6 pm – 8 pm, Will, in conjunction with Sound Mind Sound Body Foundation (SMSB) and the Heilmann Recreation Center, will impact the Detroit community by sharing the responsibility to render hope and help those in need.

Will Johnson playing for the Detroit Titans.

“Being able to give back to the east side of Detroit with the same people who poured into me: The Detroit Titans and Sound Mind Sound Body is everything to me. They have had a hand in helping to raise me. Sound Mind Sound Body is how I got here and being a part of the program at such a young age, and watching the habits of the older guys was a beneficial influence.” Will mentioned instructional guidance from the bible as his driving force for giving to others. “It’s important to stay humble and give back. Someone did it for me! If I can be in a position to help, then why not help?” 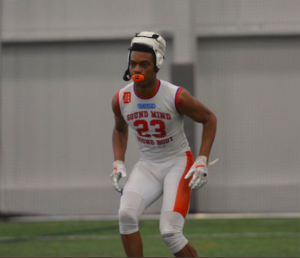 Will Johnson in action with Sound Mind Sound Body.

Will grew up not too far from where he’ll be giving back. Serving others also grants Will an opportunity to work with his former youth league coach, Byron Spivey of the Detroit Titans, who serves as the director of the Heilmann Recreation Center. A full circle of how the village produces mentors through mentorship is where Will finds himself filling in the gaps. He has credited his humbleness and well-rounded knowledge as a student-athlete to The Sound Mind Sound Body Foundation, which he has been a part of since the beginning of his football days.

Showing the community that there are people who care and want to make a difference is something Will doesn’t take lightly. His father, former defensive back for the Michigan Wolverines, Deon Johnson, is the co-founder of SMSB. Deon understands the significance of showing up where there’s a need and is committed to creating spaces and giving resources to increase the chances of success and expansion of ideas. Will undoubtedly has the support of a village as he uses his humanitarian efforts to enforce change.

Volunteers from The Dream Team youth group will be helping to pass out Turkeys, and SMSB will donate $1,000 to each organization within its youth league.