The 6-foot-1, 175-pound defensive back committed to Kentucky on his father’s birthday.

“It was between Virginia Tech, Purdue, Minnesota and Kentucky,’’ Hairston said. “Everything I wanted in a school was Kentucky. I did it on Aug. 17 because that’s my father’s birthday.’’

Since Hairston has been in the program he has traveled to Florida, Louisiana, Mississippi, Tennessee, Philadelphia and Arkansas.

His SEC offer came while he was part of SMSB, which has given him the confidence and swag to face some of the top receivers in the country.

“I saw the athleticism his sophomore season while he was playing on junior varsity,’’ said West Bloomfield head coach Ron Bellamy. “Maxwell is a great kid, who is the ultimate competitor. He has developed himself into one of the elite corners in the Midwest. He is a young man who does things the right way and is a team first guy.’’ 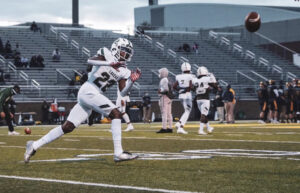 He is ranked as the 59th best cornerback in the country by 247 Sports and the 19th best player in the state of Michigan.

“Being with Sound Mind Sound Body, I’ve been able to go against different competition across the country,’’ said Hairston. “How do I stack up? You know me I’m a lockdown.’’

Translation: If you throw to Hairston’s side of the field, he’s looking to make life miserable for quarterbacks and wide receivers. 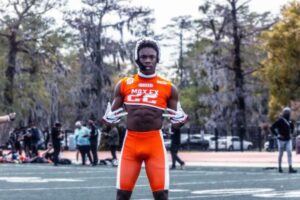 Because of SMSB his travels have made the country accessible. “Traveling with Sound Mind Sound Body has been great,’’ said Hairston. “I’ve seen parts of the country I wouldn’t have. Coach (Curtis) Blackwell’s program gives you a chance to see different colleges and how people do things outside of the state of Michigan.

This was my first year in the program. Academically, the mentorship program has helped. I didn’t need the SAT this year but if I had, I would’ve been ready.’’ Hairston would’ve joined the program sooner, but he was injured and didn’t get a chance to participate.

“We have a great program at West Bloomfield,’’ said Hairston. “We have great coaches and great players. We’re a family. We love each other.’’ Through West Bloomfield and SMSB, Hairston has improved his technique and more importantly gained the confidence to know he could go to one of the best football conferences in the country and compete.

“I recently ran a 4.4 (second) 40-yard dash, hand-timed, so my speed has improved,’’ said Hairston. “The classroom work at Sound Mind Sound Body helps you realize you have to be just as successful in the classroom as well as the field in order to compete.

“My mindset on the field is it’s me against you and I’m not losing. I told my coach to put me on an island with the best receiver on the other team and let’s play. I’ve gotten better with playing with my hands and being aware of what’s coming. I play through their eyes so I can see what’s coming. I watch where they line up and where I think they’re going to throw.

“My speed and my height, long arms and everything have played a role as well.’’