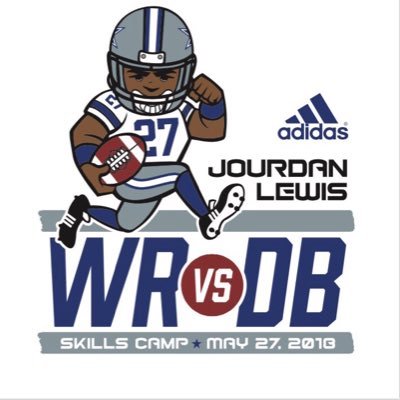 DETROIT – Dallas Cowboys defensive back Jourdan Lewis hosted his first WR vs. DB Skills Camp at the Detroit PAL headquarters on Sunday. The free event for hundreds of middle schoolers and ninth-11th graders featured a multitude of talented recruits, 45 of which have already received scholarship offers. 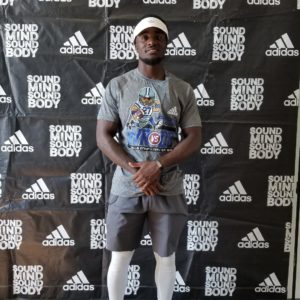 Jourdan Lewis was the “man of the hour” on Sunday at the Detroit PAL headquarters.

“It was a blessing to come out here and have fun with the kids,” Lewis said. “It meant the world to me that they gravitated towards me. You can tell when the kids are shut off and (when they) tune out the messages of guys at camps. But every student athlete here was in tune, and definitely focused on what we were trying to get done.” 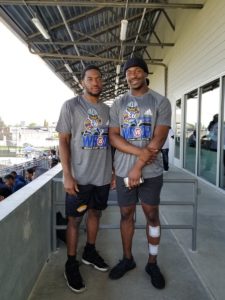 Lewis has every intent to make the camp an annual event held in Detroit.

“It’s extremely important to have this camp here in Detroit, especially for the kids that can’t get transportation outside the city,” Lewis said. “Everything started here (in Detroit). About 90 percent of these kids came from Detroit PAL, and probably everyone here is in Sound Mind Sound Body.”

The camp began with a middle school session. Antonio Gates Jr., the son of All-Pro tight end and Chargers legend Antonio Gates, was the wide receiver MVP of the camp, while Will Johnson and Anthony Pinnace took home the defensive back and quarterback MVPs, respectively. 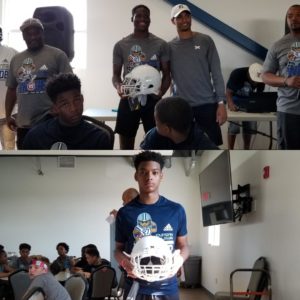 (On the top): Wide receiver MVP Antonio Gates Jr.; (on the bottom): Defensive back MVP Will Johnson

After the middle-school session, the talent-loaded group of high schoolers showcased their skills in position-based drill work that led to a “three defenders vs. two wide receivers” drill. It forced wide receivers to run crisp routes and quarterbacks, like Walled Lake Western’s Sam Johnson III (class of 2019; committed to Boston College) and Detroit Renaissance’s RaeQuan Beal (class of 2020), to fit passes into tight windows.

Capping off the camp was a competitive one-on-one segment, which was dominated by Belleville defensive back Andre Seldon Jr. (class of 2020) and Detroit King wide receiver Darrell Wyatt (class of 2019).

Beal was awarded the camp’s QB MVP, while Wyatt won the WR MVP and Seldon took home the DB MVP. 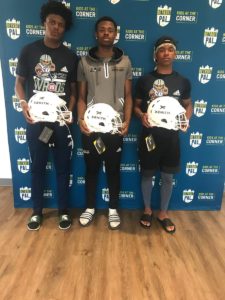 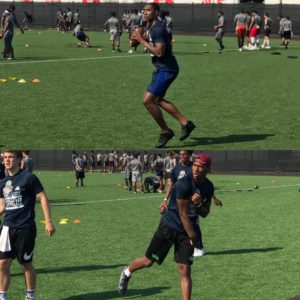 The day also consisted of life-changing and motivational messages handed down by Lewis and his former coach with the Westside Cubs, William Tandy, inside the Detroit PAL headquarters’ banquet facility.

Lewis told the campers that “when you go to school, it’s not just about football. It’s about making connections.”

When it comes to picking a school to attend and play for at the next level, he added, “It’s your decision. Don’t let anyone take that away from you.”

He also emphasized to the student athletes the importance of focusing on the “right things” instead of distractions and negative energy that other individuals may bring into their lives. According to Lewis, these right things are “schoolwork, football and the positives” they’ve experienced and can look forward to experiencing.

Meanwhile, Tandy harped on the importance of being focused and how it can make a major difference in whether an individual continues to advance or fails to continue to advance in their football career.

Through Lewis and Tandy plus friends and family and former teammates of Lewis, the campers were able to soak up tons of valuable experiences both on and off the field.

With the help of camp sponsor adidas, Lewis also provided each camper with free adidas cleats.

For all his efforts in organizing and putting on the camp, Lewis received the “Certificate of Recognition” from the city of Detroit and Detroit Mayor Mike Duggan. 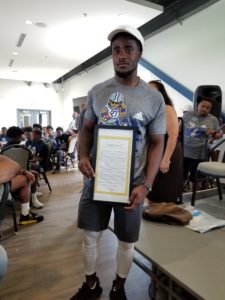 Lewis with his “Certificate of Recognition” plaque

Lewis gave the students a day to remember via the one-day camp, and it won’t be the last time he does so. He intends on continuing to give back to the community, and already has started thinking about what next year’s camp will feature.

“We’re trying to get some sponsorships and some big-hitters, like GM, to come out here and support the kids,” Lewis said. “UAW supports Cass Tech a lot, and does a lot with the Horatio Williams Foundation. So, we’re going to try to get some of those guys out to help the kids and to make sure this is even a bigger and better event and experience next year.”

Sound Mind Sound Body returns to the camp scene with the “Best of the Midwest” camp at Grand Valley State University tomorrow. The day will kick off at 9 a.m., and end at approximately 4 p.m. Check out http://www.grandvalleystatefootballcamps.com/best-of-the-midwest.cfm for more details regarding the camp itinerary.