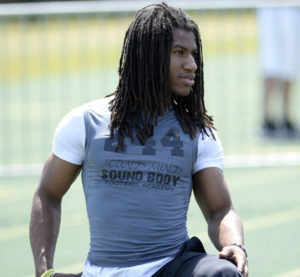 The freshman was a part of the Sound Mind Sound Body Football program for four years. He was a four-star recruit coming out of Detroit Cass Tech, and was ranked the third-best player in Michigan for the class of 2017 by 247Sports. The pre-med major, who has aspirations of becoming an orthopedic doctor one day, accumulated two tackles, and contributed on special teams this past season for the Wolverines.

What did taking part in Sound Mind Sound Body mean to you?

Kelly-Powell: “It meant a lot to me. A lot of people that I look up to and still look up to went to Sound Mind Sound Body, and taught me the ropes. Curtis Blackwell, who started it (SMSB), I had a great relationship with him, and still have a great relationship with him. He kind of took me under his wings, and got me into it. He showed me how to get better and how to get recognized and get exposure. On top of all that, I realized the camp was so good that everybody around the country kept coming to it. So, I got the chance to go against the best of the best.”

What were the biggest lessons that SMSB taught you?

Kelly-Powell: “Never give up, and keep repeating everything because everybody’s always looking at you. And to keep your grades up. They harped on football, but they also harped on the importance of keeping your grades up because you can’t go to school without that.”

How did SMSB prepare you for the rigorous academic coursework at the University of Michigan?

Kelly-Powell: “It helped me a lot because of course, Michigan is one of the top schools in the nation for academics and experienced domestic workers. So, it has helped me to be on top of my work. The coaches (at SMSB) always made sure that you were on top of your work and that your grades were good. So, it has smoothed everything out for me at Michigan.”

How did Cass Tech prepare you for Michigan?

Kelly-Powell: “Cass Tech had like a thousand papers for you to do, which is also the case at Michigan http://www.619roofing.com. Math is still the same, just taught differently. Everything you see at Michigan, I’ve seen before. It’s just taught a different way. So, I had a good foundation because of going to Cass Tech.”

What kind of role can you envision getting involved in with Sound Mind Sound Body after you’re done playing football?

Kelly-Powell: “I can see myself coming back to coach, giving my knowledge and wisdom to the kids, like the other guys did for me.”