Jakobe Watkins knew something was wrong.

In March of 2019, after completing a season at Belleville High School where he was named All-Conference and made some All-State teams as a freshman offensive lineman, he felt something uncomfortable in his left knee.

“I was at the Nike Opening in Akron,’’ said Watkins. “We were doing drills and my knee didn’t feel right.’’

He returned home to find out he had torn his ACL, MCL and meniscus.

It was a devastating blow.

“I didn’t see my football future pass before my eyes, but I knew it was going to take a lot of hard work to get back to where I wanted to be,’’ said Watkins.

He had surgery at the University of Michigan Hospital.

His sophomore year would be spent watching from the sidelines, looking and hoping he’d get back on the field.

“It was difficult,’’ said the five-year Sound Mind Sound Body veteran. “Especially mentally. Some days I just didn’t want to go to rehab. I had to push myself. It was tough watching the guys. Sitting out my entire sophomore season was as difficult mentally as it was physically. I couldn’t help the team.’’

Plus, there was no sophomore tape to send college coaches.

Then heading into his junior year, the COVID-19 pandemic threatened to end his season even before it started.

While waiting and rehabbing, Watkins started to regain his strength. The knee was healing, and the more he tested it the better it felt.

By July he said he knew playing as a junior would be an option if the Michigan High School Athletic Association allowed the Tigers and the rest of the schools to play.

His dedication and commitment to getting back on the field wasn’t overlooked by Belleville head coach Jermain Crowell, who’s in his sixth season at the school. 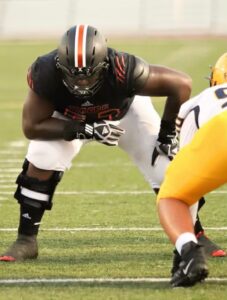 “Physical domination!!! Total package,’’ said Crowell. “He takes pride in being the best offensive lineman in the state. He’s relentless. He’s finally getting in playing shape and playing at the level he was playing before his injury. He will definitely be one of the top 10 players in the state next year.’’

His role model has always been Devontae Dobbs, who is in his second season at Michigan State.

“My freshman year he was the guy I was trying to emulate,’’ said Watkins. “That’s my guy. We still text each other. He was ranked as the fifth best player in the country at his position. That’s where I want to be.’’

Since he has gotten a chance to play the offers are piling up. Kentucky, Akron, Arkansas State and Mississippi have offered a scholarship. Michigan State, Toledo, West Virginia and Arizona State are showing interest.

On and off the field SMSB has helped with his goals. 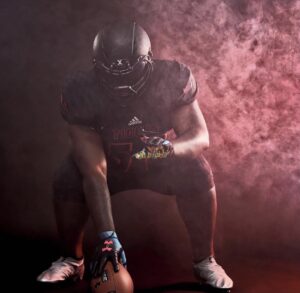 “I wanted to become a better football player and be the best version of me I could be,’’ said Watkins. “Coach (Curtis) Blackwell and the program have put me in a lot of good opportunities to become a better football player and a better man. It has put me in a position to become successful in life. Academically, he (Blackwell) makes sure we are ready for standardized tests. If you need any help with tutors they are provided.’’

Before the pandemic hit in March, Watkins was able to travel with SMSB to Louisiana, Mississippi, Arkansas and “a plethora of places,’’ he said.

Also on that list is senior quarterback Christian Dhue-Reid, who finally achieved his goal with his 125th career touchdown pass in a 34-0 win over Northville during the district semifinals.

“Christian is a great leader. He has put us in a great position, and I hope he gets everything that’s coming to him,” said Watkins

“If we don’t win a state title this season it’ll be a disappointment. We have to win.’’