Portage is roughly two hours and 30 minutes from the east side of Detroit.

For Portage Northern senior Anthony Tyus III, the ride was worth it.

Being a part of the Sound Mind Sound Body program allowed him to gain exposure that the west side of the state doesn’t afford him.

“The trip wasn’t really that bad,’’ said Tyus. “We usually travel an hour, hour-and-a-half to Lansing each week for ministry, so the extra hour isn’t a biggie. My family and I are usually on the road. We were willing to go to Sound Mind Sound Body and get a workout in, get the exposure and have a great time.

“I think Sound Mind Sound Body is a great opportunity for kids that don’t necessarily have the resources to get out there and show their talent. I feel like there’s a lot of talent in Michigan that goes unseen. It doesn’t matter where it is. I think the class of 2021 proves that we have a lot of talent. Coach (Curtis) Blackwell does a tremendous job of organizing events, and not just having agility training, but having speakers come in and talk about things and mentor us.’’

One of those speakers is Anthony Tyus Jr., his dad. The former Central Michigan University football player is a motivational speaker in the realm of Eric Thomas, who has created a national stage and is a regular at SMSB.

Principle – The Right Work gets the Right Results. pic.twitter.com/cqAaW4bRqo

It is a four-year leadership initiative for high school students who are role models in their communities. Jeter’s Leadership Program is the signature program of the Turn 2 Foundation, which was started by the former New York Yankees shortstop and Kalamazoo native in 1996 to motivate young people to turn away from drugs and alcohol and promote a healthier lifestyle.’’

Tyus III is a potential pre-med major in college. He has taken advantage of the mentorship program, the workouts and the exposure to gain a scholarship to one of the most prestigious schools in the country.

Louis Ayeni, the Northwestern recruiting coordinator, pulled out all the stops in recruiting Tyus.

The 6-foot-1, 207-pound senior committed to the Wildcats in June, and both appear excited about the union.

“From the head coach to the running backs coach I felt like they really wanted me,’’ said Tyus, who took time out on Friday from his powder puff coaching duties to talk about his future. “They’re the school that really celebrated me instead of tolerating me, plus, the academic prestige there. I took the virtual visit, and it was absolutely amazing. The biggest thing was they wanted me not just as an athlete, but a man.’’ 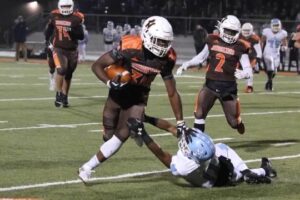 As a junior, Tyus rushed for 1,861 yards and was named to the All-State team. The three-star performer is ranked as the 56th best running back in the country by 247Sports and the 20th best player in the state of Michigan.

If you want to analyze Tyus’ running style watch Tennessee’s Derrick Henry, who pulverized Buffalo cornerback Josh Norman in a National Football League play that was one for the ages.

“I had a stiff-arm like that in a game last Friday,’’ said Tyus. “My dad edited it and posted the play next to Henry’s play. They almost looked the same.’’

A smallish cornerback would have to make a business decision when trying to tackle Tyus because it might hurt.

“When he was growing up it was Todd Gurley,’’ said Tyus Jr. “Now it’s more Derrick Henry and Saquon Barkley. He watches them a lot, and his style is similar.’’

What Sound Mind Sound Body provided Tyus was the opportunity to show he’s as good as any player on the east side of the state.

“After rushing for 1,800 yards last year someone said, if he was on the east side he’d be a top five player in the state of Michigan and have 30 offers,’’ said Tyus Jr.

“We kind of resented that. After the first couple of workouts at Sound Mind Sound Body people knew he could play. He made the NIKE All-Star team along with some players from the Detroit area.

“There was a player at Sound Mind Sound Body, I’m not going to say his name, but he’s one of the top players in the state — told Anthony you should come play for us because we need a running back.

Both on and off the field.