Bobby Simes Jr., had to tell Deone Walker Jr., it was okay to hit his little league football opponents.

“He was always the biggest kid on the team,’’ said Simes, his Detroit Giants youth league coach. “He was a gentle giant. He didn’t want to hurt anybody. He wasn’t aggressive at first. We had to teach him that it was alright to go out and hit people on the other team.

“We told him he was protecting his teammates. If he didn’t protect them, we told him nobody else would. In a small sense it was like “The Blindside” (movie). I told him football is a physical sport. Players get hurt. That’s part of the game.’’

In college he wants to play defense because: “I like hitting people. I want to be a defensive lineman.’’

It shouldn’t be a problem. His recruitment should be blowing up in good time. He has learned his lesson as far as being physical.

Michigan State, Toledo, Nebraska and West Virginia have shown initial interest. Michigan, Pittsburgh and Central Michigan have shown interest, but not as much as MSU.

“He’s just a great kid,’’ said Simes. “He still comes to all of our practices. He comes to the games. He helps out the younger kids. He’s very coachable. He wants to learn and get better.’’

Walker started attending the camp when he was 11.

“My dad thought it would be good for my development to be in Sound Mind Sound Body. I’ve improved my bull-rush and become more of a physical player,’’ said Walker. “I have good hands. I’ve learned to use my hands to get people off me and rush the passer.

“Offensively, I’ve done a better job of getting in my stance in pass protecting and sitting down to give myself good balance.’’

SMSB gave him a taste of why academics was important.

“If your grades weren’t right you couldn’t participate in camp,’’ said Walker. “You’d have to go downstairs in the classroom and study. It made me rethink some things as far as academics. The training for the SAT was invaluable.”

Center Raheem Anderson (6-3, 295) is his role model. Anderson, an SMSB participant, started in the ninth grade and is a Michigan commitment. Rivals.com listed Anderson as the sixth best senior in the state.

“He’s like a big brother to me,’’ said Walker. “He’s the leader of our offensive line. I think we have a special group this year. We can run the ball. We’re strong up front and I think we have a chance to win the state title. That’s where my focus is now. I’m not really worried about recruiting. I want to win.

“We have a lot of skill players coming back next year, so I think we could make a run this year and next year. I want to win a state title.’’

Walker could easily be at Detroit King, but Simes said he talked him into Cass Tech. 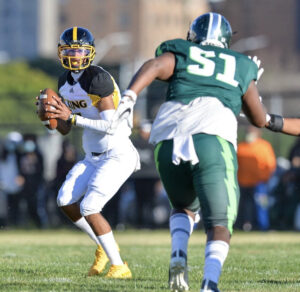 “We’ve sent a lot of players to both schools, but I thought academically Cass Tech was a better fit for him,’’ said Simes. I think he initially wanted to go to King. I kind of talked him out of it.’’

The Crusaders are probably disappointed in that decision, but maybe they’ll get a shot at his little brother; Tyler, who is 8 and already is 5-5, 160-pounds. “He’s the biggest kid on our B team,” said Simes.