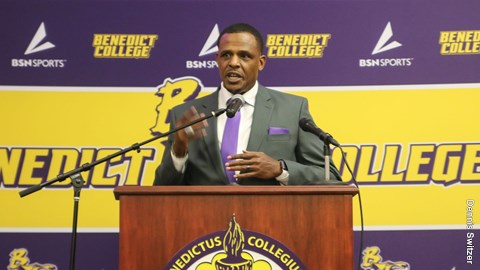 The second annual Sound Mind Sound Body (SMSB) HBCU College Academy will be held in Detroit from May 12-14 at Martin Luther King Jr. Senior High School. This year, SMSB will have twice as many colleges and their football coaches in attendance. The FREE event will feature Benedict College head coach Chennis Berry and his staff.

Benedict College is an HBCU founded in 1870 in Columbia, South Carolina on the land of a former plantation. The school was formed to educate freedmen and held its initial classes in the mansion of the former slaveholder. Initially called Benedict Institute, the school was named after abolitionist Bathsheba A. Benedict, who provided $13,000 in funding to start the school. Timothy S. Dodge served as the first president of the school.

From its founding, Benedict College was led by a succession of northern white Baptist ministers and educators. However, the year 1930 signaled the succession of African-American male presidents that continued until June 30, 2017, when Dr. Roslyn Clark Artis was unanimously appointed by the Benedict College Board of Trustees as the 14th President of Benedict College. She is the fourteenth and first-female President in the 152-year history of the college.

Benedict College football plays in the SIAC Conference and went 5-5 in 2021. Head coach Chennis Berry is in his third season at BC and has coached in the HBCU ranks for over 20 tears.